A couple of days ago images leaked from a private FIA press conference where Ross Brawn outlined his plan for the future of F1. These proposals were to streamline the development of the cars and develop a financially sustainable future for the sport which would allow the entry of more teams and hopefully, a wider range of manufacturers. The costs of running a current F1 car are astronomical, with over £100 million invested just into the front wing alone. This has created a two-tier grid between the top three teams and everyone else. The image below represents a guideline into how the new cars could look. 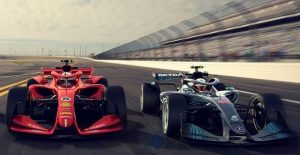 The cars now featuring the larger wheel rims, simpler specs front and rear wings along with a more athletically pleasing halo. The halo stands out straight away with its new curved design flowing better with the lines of the car along with far greater visibility of the driver’s helmet. Apparently, the bodywork and side-pods may be open to greater development by the teams. No doubt numerous details will be announced as final specs are agreed, however according to SKY F1’s Ted Kravitz, there appear to be no plans to change the engine spec. The answer Ted received from Ross was vague at best but given the ludicrous cost and over complexity of a modern Formula One power unit, surely this would have formed as a great starting point for reducing costings and bringing in more engine manufacturers. There’s still a lot of this story to be written, but what do you think of the concept image and why are they on what appears to be an Indy oval? Let us know your thoughts in the forum. Further details have just been released on the official F1 website, we’ll be sure to have a peruse over these and garner information on some of the key changes.

It feels strange to be talking about the next “new look” of F1 cars, when we’re less than two years into the current regulations. But I know these things take time. And it’s good to see them experiment with a number of concepts. The lack of new engines makes sense. Proposed changes were meant to entice new manufactures; but if none are biting, it would just leave the current manufactures fitting the bill on redevelopments. It might just come down to updates, like battery capacity/output. I think, how Liberty plans on replacing the concord agreement, will be what triggers potential… Read more »

Earlier this week news emerged of the agreement for the Alfa Romeo name to return to Formula 1. Taking over the struggling Sauber outfit which in turn becomes Alfa Romeo Sauber F1. A welcome surprise, this brings back an auspicious name and heritage to the sport. It also affords the team better technical support from […]

It’s a dam grey day is Shanghai; the circuit is wet but with no more rain who will take the risk to start on intermediate tyres of slicks. But there is an air of excitement, the weather making for an unpredictable race in store as we still continue to learn more about these new cars.  […]

Following some close times in FP3, anticipation was high for a close qualifying session with several battles throughout the field along with a range of rookies trying to make their mark. This was a high-pressure session and not without incident.  Qualifying 1: Dry weather for todays session, the cars following a running order similar to […]