Wait, what? Why is a golf game on TeamVVV, I hear you ask? Well, this one deserves a mention because it's being developed by the original creators of Burnout. Forget Crazy Golf: this is Dangerous Golf, the first game to be released from Three Fields Entertainment, a British indie studio set up by former Criterion co-founders Alex Ward and Fiona Sperry in 2014. 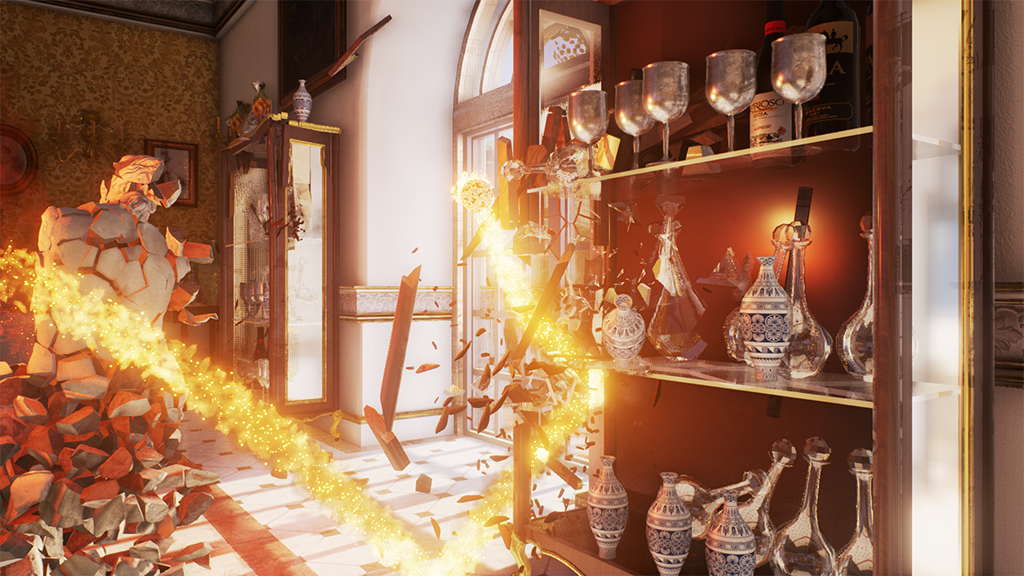 Dangerous Golf is heavily inspired by Burnout's classic Crash mode, which had you ploughing into traffic-congested junctions with the aim to inflict as much damage as possible. The more chaos you caused, the higher your high score. Replace cars with a flaming ball and traffic with everyday objects such as stacked chinaware in a kitchen, a petrol station that can be set on fire and a swanky chandelier that can be shattered and you get a pretty good idea of what to expect from Dangerous Golf which looks like it will do for golf games what Burnout did for racing games.

Players will get to wreak havoc in a number of locations, including a hotel kitchen, a glittering palace ballroom, a rural gas station and a stately medieval castle with online and local multiplayer support.

It’s being developed with some serious technical prowess too: Three Fields worked Epic’s Unreal Engine 4 team and Nvidia to “not only push the boundaries of their PhysX, Apex Destruction and Flex technologies, but also to deliver a truly physics based game experience,” a post on their official website reads.

“By harnessing the power of world class technology provided by Epic and nVidia, we are pushing the boundaries of fast action, amazing destruction and multiplayer gaming. Dangerous Golf is just the beginning of a series of games that will focus on speed, danger, excitement and destruction.”

Now just imagine that technology applied to a racing game. Indeed, Three Fields have already outlined thier plans to develop a spiritual successor to Burnout 3: Takedown, but it's likely the reception of Dangerous Golf will determine if it gets the green light.

Dangerous Golf is aiming for a hole in one on the PS4 and Xbox One digital stores this May.