After hinting that future MotoGP games could be ported to Nintendo Switch, developer Milestone has confirmed that MXGP 3, the officially licensed motocross game released on PS4 and Xbox One back in March, will be landing on Nintendo Switch later this year. No other details have been revealed, other than the confirmation that the title will be arriving on the Switch platform “by the end of the year.” 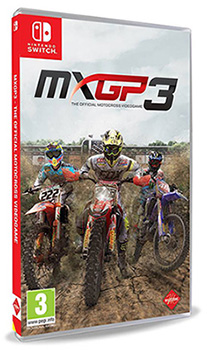 Hopefully it won’t be too long until a final release date is confirmed.

Assuming there are no content cutbacks in the Switch verison of MXGP 3, you can expect the full roster of riders and tracks from the 2016 MXGP season including the Monster Energy FIM Motocross of Nations, a career mode that takes you from the entry-level MX class to the demanding MXGP class, and comprehensive bike and rider customisation with more than 300 official components from over 75 brands.

The last time the series was released on a handheld console was the PlayStation Vita version of the original MXGP game back in 2014. While it was a faithful port, due to hardware limitations it didn't have any deformable terrain which has become a staple feature of the series and one of MXGP 3’s most acclaimed features along with its more realistic graphics running on Unreal Engine 4. Given the complexity of the physics, it will be very impressive to see MXGP 3’s advanced terrain deformation on a handheld device.

You can find out more about MXGP 3 in our full review, where we declared it as “the most authentic, exciting and challenging motocross game released in years” despite a few shortcomings.