A new expansion pack focusing on the The Fast and the Furious movie franchise will be coming to Forza Horizon 2, publisher Microsoft Studios has revealed. 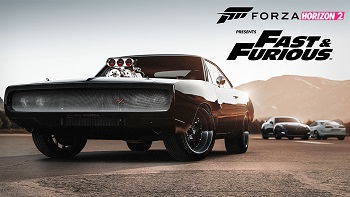 Titled "Forza Horizon 2 Presents Fast & Furious",the expansion pack is set in the same France/Italy locale seen in the core Forza Horizon 2 game, with the premise being to source cars for the Fast & Furious crew's "next big mission" by completing a series of in-game challenges.

The cars themselves are all said to be inspired by those seen in the Fast & Furious films, including the upcoming Furious 7 blockbuster which will be released in theatres later this year.

From the pack's launch on March 27th through to April 10th, the Fast & Furious expansion will be available for all players to obtain free of charge. After this point, the pack will cost users $10 (likely £6.99 in the UK) to download and install.

Interestingly, Forza Horizon 2 Presents Fast & Furious will be released on both the Xbox One and Xbox 360, making this the first piece of Forza Horizon 2-related DLC to be made available on Microsoft's seventh-gen console.

The pack will also be sold as a standalone title, meaning players won't need to own a copy of Forza Horizon 2 in order to access the content in this expansion pack. However, existing Forza Horizon 2 owners will have the benefit of being able to use the Fast & Furious-themed cars in the core game.

Some of the Fast and Furious themed cars that will feature in the expansion are as follows:

Forza Motorsport 7 isn't even out yet, but that hasn't stopped Turn10 from revealing the first car pack. Continuing the series' partnership with the Fast and Furious franchise, those who buy either the Forza Motorsport 7 Deluxe or Ultimate Edition, which will be available at the earlier date of September 29th, will get access to […]

If you thought The Fast and Furious franchise was getting a bit too macho (let's face it, Fast 7 gave us an overdose of testosterone with Dwanye Johnson, Vin Diesel and Jason Statham pummeling each other), there's good news for fans eagerly awaiting the eighth installment:  Charlize Theron is playing the villain in Fast and […]