Fanatec are still showing no signs of slowing down after their onslaught of product reveals over the past few months with the reveal of yet another new wheel rim. And this one is rather special. 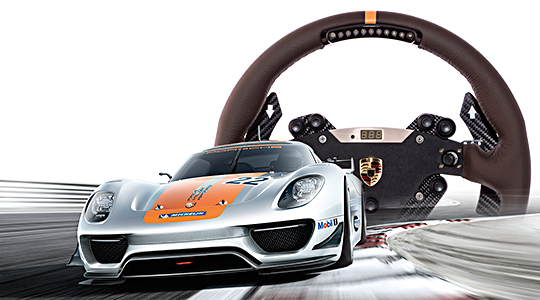 The latest addition to to the ever-expanding Fanatec family is the Porsche 918 RSR Wheel rim for the ClubSport Wheel Base, reinforcing Fanatec's German heritage as the company first started selling Porsche-branded wheels before focusing on high-end sim racing peripherals. Unlike Fanatec's other wheel rims, which were designed to be compatible with the Universal Hub, the 918 RSR is a completely standalone rim.

Measuring at 320mm in diameter and fully licensed by Porsche, the rim is an exact 1:1 replica of the wheel used in the race version of the Porsche 918 RSR. An impressive feat considering that "replica" wheels are often scaled down.

With such prestigious pedigree, you would assume that the 918 RSR would be built from premium quality materials. And you'd be right: the 918 RSR rim is constructed with genuine automotive grade leather, carbon fiber and aluminium. It's also 30% lighter than the BMW GT2 rim, resulting in increased acceleration and fidelity.

Being a high-end product, the Porsche 918 RSR rim sports a hefty price tag: it's currently available to order from Fanatec for €399.95 / $399.95, which places it higher than the other recently-revealed wheel rims. Don't forget you'll still need a ClubSport Wheel Base to fit it with, too.