We already knew it was coming from (last month's Japan leak was a bit of a give away), but today at Gamescom Sony officially announced DriveClub VR for PlayStation VR, confirming a release for later this year. 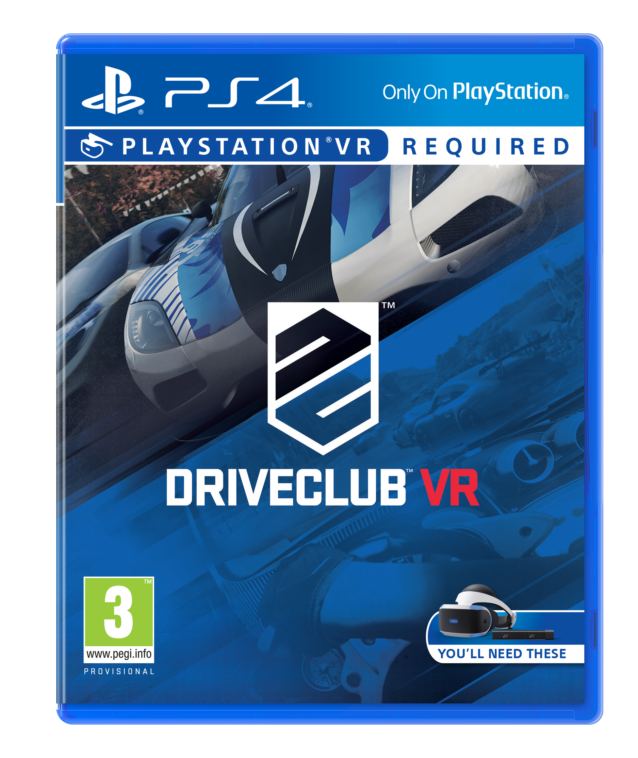 Judging from the box art released, DriveClub VR appears to be a standalone release rather than an add-on for the existing game.

DriveClub VR will be based on Evolution's original game with new game modes, features and tracks including classic tracks from the original game and five brand new urban tracks. Over 80 cars will feature – you'll be able to gawp in awe at the obsessive levels of detail that goes into the car modelling in the new Inspection Mode.

Tracks: New and classic Driveclub tracks are brought to life through the power of PlayStation VR, including five all-new Urban locations
A closer look: Every car is recreated with immaculate detail for players to explore up close with Inspection Mode
Cruise control: A little time to kick back, open the throttle or just coast and explore any track, in any country at your leisure in Cruise Mode.
Virtual passenger: An immersive thrill ride through exciting replays of hot laps as players watch themselves handle their greatest challenges from a unique viewpoint in Passenger Mode.

No official release date has been given yet, but the Japan leak previously pointed to DriveClub VR releasing as a launch title for PS VR – which would be October 13th.

Pricing details also haven't been confirmed yet. Since DriveClub VR essentially seems to be a cut-down, VR-only version of the original game ,I would be surprised if it was released as a full price game.

However, DriveClub's original Design Director Paul Rustchynsky has confirmed via Twitter that DriveClub VR will be available at a discounted price for existing DriveClub season pass owners.

Looks like there will be discount for #DRIVECLUB season pass holders when buying #DCVR https://t.co/6HSztILWQg

Codemasters has finally added virtual reality support to DiRT Rally 2.0 – though only for players on the PC with Oculus headsets. Upon installing the latest “version 1.7” update, players of the rally racing game on Steam will be able to experience the game using their Oculus devices. This, the developers claim, will allow players […]

A professional grade version of Slightly Mad Studios’ Project CARS racing game has been revealed at the 2018 Los Angeles Motor Show. Set to officially launch sometime in 2019, the Project CARS Pro platform has been designed as a “unique and distinct product with the ability to create unparalleled client experiences”. As a showcase of […]

Ahead of the final race of the 2018 Formula One World Championship, HTC has announced a McLaren-themed version of its Vive Pro virtual reality headset. Simply named the “HTC Vive Pro McLaren Edition”, the package a pair of 2018-spec controllers and a Vive Pro headset – with the latter sporting orange accents reminiscent of the […]