At the last race, Webber’s win closed the championship gap to Ferrari’s main-man, Fernando Alonso. This weekend at Hockenheim in Germany was shaping up to be very similar to that last Grand Prix at Silverstone; wet and miserable, but with a dry race.

Throughout all three Practice sessions there was very little running from the top teams, most of whom chose to save their limited number of wet tyres for Qualifying, a lesson learned at Silverstone. Q1 was dry but 2 and 3 were badly affected by huge downpours. This, combined with various penalties dished out for gear box changes and blocking in qualifying, made for an unusual grid. However, the front row looked very familiar. Alonso proved again that he has improved his wet weather driving, taking pole 0.4 seconds ahead of Vettel. Alonso made a terrific start, allowing him to build a small gap on the first lap while Vettel defended from third place Schumacher. Unfortunately, Massa allowed himself to get caught up in the chaos of the midfield with a poor qualifying performance. He lost his nose against another car in the first corner and that put him on the back foot for the rest of the afternoon.

From there on, it was a game of cat and mouse between Fernando and the local favourite, Mr. Vettel. It looks for much of the race like the Red Bull was definitely the faster car in the dry, but Alonso was able to defend well whenever the world champion entered the DRS Zone and at times he showed just enough pace to keep the gap above a second, preventing Red Bull’s man from using his DRS at all.

Later in the race, Jenson Button showed remarkable place in the newly updated McLaren. He took the fight to Vettel, giving Alonso just enough of a comfort zone to manage his car to the finish and become the first driver to win three races in 2012. 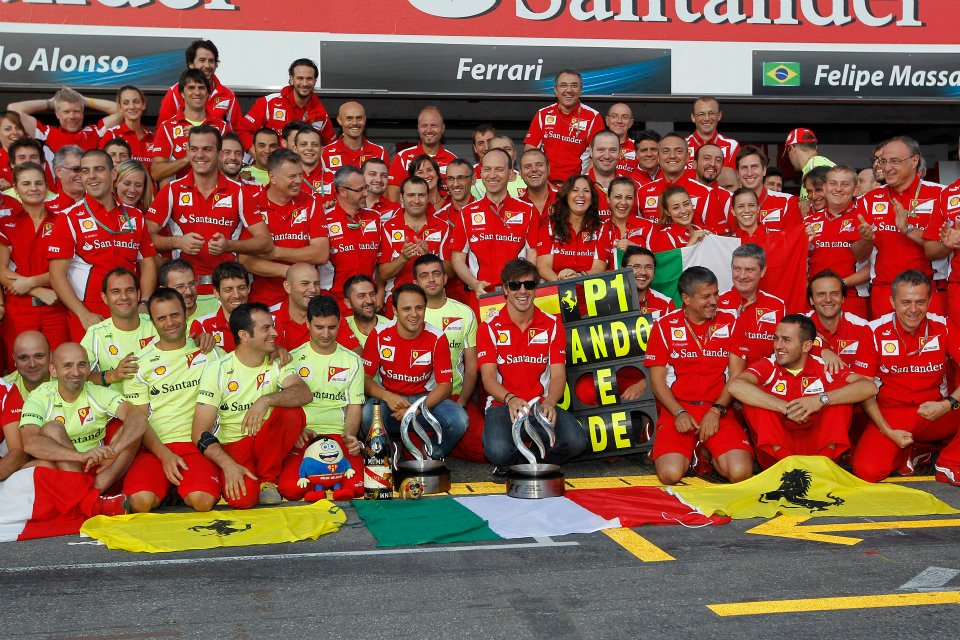 This was a great day for Fernando’s title fight as Webber could only manage eighth place, Hamilton failed to finish and Vettel received a post-race penalty which dropped him to fifth.

Joe Barron is the Community Evangelist at iPhone game developer, Kwalee. He is an avid racing gamer and has written sim & wheel reviews for GameSpot.com, CItizenGame.co.uk and HookedGamers.com. He’s also a massive Ferrari fan!

A couple of days ago images leaked from a private FIA press conference where Ross Brawn outlined his plan for the future of F1. These proposals were to streamline the development of the cars and develop a financially sustainable future for the sport which would allow the entry of more teams and hopefully, a wider […]

Earlier this week news emerged of the agreement for the Alfa Romeo name to return to Formula 1. Taking over the struggling Sauber outfit which in turn becomes Alfa Romeo Sauber F1. A welcome surprise, this brings back an auspicious name and heritage to the sport. It also affords the team better technical support from […]

It’s a dam grey day is Shanghai; the circuit is wet but with no more rain who will take the risk to start on intermediate tyres of slicks. But there is an air of excitement, the weather making for an unpredictable race in store as we still continue to learn more about these new cars.  […]